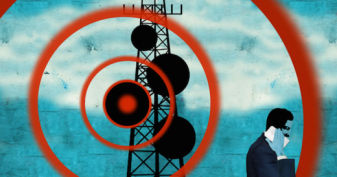 form of energy. It represents one of the fastest growing environmental influences we face today. All electronic devices produce EMF, but EMF produced from cell phones have come under the most scientific scrutiny due to its ever increasing presence and how we use them. Cell phones emit multiple EMF frequencies in order to function as an electronic device and to send and receive signals from cellular towers. Mobile phones typically operate at frequencies between 450 and 2700 MHz with peak powers in the range of 0.1 to 2 watts.

While special interest groups continue to refute findings, a number of studies now point to the dangers of EMF exposure from cell phone use. A recent 2014 study by the Hardell group in Sweden found a consistent pattern of increased risk for glioma and acoustic neuroma associated with the use of mobile and cordless phones.

The Environmental Working Group studied a group of men who carried their cell phone on a belt clip during a five-day test period. The result was a 19% decrease in motile sperm. But perhaps the most compelling is a 2012 report published by the BioInitiative Working Group, an independent organization comprised of 29 scientists from over 10 different countries. The report concluded that:

Many of these bioeffects can reasonably be presumed to result in adverse health effects if the exposures are prolonged or chronic. This is because they interfere with normal body processes (disrupt homeostasis), prevent the body from healing damaged DNA, produce immune system imbalances, metabolic disruption and lower resilience to disease across multiple pathways. Essential body processes can eventually be disabled by incessant external stresses (from system-wide electrophysiological interference) and lead to pervasive impairment of metabolic and reproductive functions. (source)

The report further concluded that:

Bioeffects are clearly established and occur at very low levels of exposure to electromagnetic fields and radiofrequency radiation. Bioeffects can occur in the first few minutes at levels associated with cell and cordless phone use. (source)

It’s important to understand that finding correlation and proving causation are two different things. Despite numerous studies showing a correlation between smoking and lung cancer, it still took over 50 years for the medical and scientific community to accept cigarettes as a cause of lung cancer.

For better or worse, this is the nature of medical science. Its up to individuals to be informed and to protect themselves. Fortunately, there are three simple and easy ways that people can protect themselves from EMF exposure.

The absorption of EMF radiation is cumulative. To help reduce your exposure, shorten the duration of phone calls as much as possible. When placing your phone in your pocket or bag, consider placing it on airplane mode or turning it off. Reducing your gadget usage is also beneficial.

EMF radiation follows the inverse square law and tapers off with distance. When possible, use speaker phone to reduce your exposure by more than 1/2. RadiArmor’s AirTube Headphones are designed with this principle in mind. Our headphones reduce EMF exposure by 99.9% when compared to exposure during normal cell use and up to 97% reduction when compared to ordinary headphones.

You can also shield yourself from the electromagnetic radiation. Shields are designed to either absorb, divert or deﬂect radiation emitted from your electronic devices. RadiArmor’s iPhone cases (available for iPhone 7 and iPhone 7 Plus) have a proprietary EMF blocking membrane lining the front cover, blocking up to 91% of EMF radiation. This not only protects you while you’re on your phone but also in your pocket.

How to lower EMF exposure

Use the speaker function

If you can, use the speaker function on your phone. If that’s not possible, hold your phone a few inches away from your ear. EMF follows the inverse square law and tapers off rapidly with distance.

Just about any kind of headphone, Bluetooth or wired, is safer than holding your phone near your ear. However, since even headphones emit EMF, the best option is air-tube headphones such as RadiArmor headphones.

Avoid calling if you have poor reception

The lower your reception, the more energy output your phone emits to stay connected, which can increase your EMF exposure.

If you absolutely have to, keep your phone in your back pocket

Even if you are using one of our anti-radiation cases, we still recommend keeping your phone away from your body as much as possible. Nevertheless, sometimes you must carry your phone near your body. So where is the safest place to keep your phone? The best choice is your back pants pocket. Your butt has a thick layer of fat and muscle and will provide the best distance from vital organs.

Put your WiFi router on a power strip

If you’re like most people, you have WiFi at home, which emits strong radiofrequency EMF. While some people recommend using a LAN line instead, this is typically too much of a hassle to be considered realistic. Same goes with turning your WiFi on and off every time you use it.  At RadiArmor, we’re all about finding practical ways to lower your EMF exposure. Here’s a cheap and easy trick… connect your WiFi router to a power strip that has an on/off switch (you can buy these just about anywhere for under $10) and turn it off before going to bed. You’ll likely sleep better and save money on your electric bill.